In Dembski's opinion, the filter is robust in detecting design - or what is the same, to avoid false positives-for two reasons. The first is an inductive one: according to the author, in every instance where the explanatory filter attributes design and where the underlying causal history is known, it turns out that design is present. Dembski seems so convinced of the utility of his filter, that he throws a challenge: "I have yet to see a convincing application of the explanatory filter in which coincidences better explained by chance get attributed to design. I challenge anyone to exhibit a specified event of probability less than Borel's universal probability bound for which intelligent causation can be convincingly ruled out" (Dembski et al., 1998a). However, this inductive argument, -continues Dembski- does not explain why the filter works. This fact brings us to the second argument of Dembski: the filter is a reliable criterion for detecting design because it can detect the specified choice. According to this author, what characterizes the intelligent causation is choice, because whenever an "intelligent cause" acts, it chooses from a range of competing possibilities. But saying that intelligent causation always entails discrimination between several choices is not enough. The next question is how to recognize their operation: "Not only do we need to observe that a choice has been made, but also we ourselves need to be able to specify that choice. (...) What is more, the competing possibilities that were ruled out must be live possibilities and sufficiently numerous so that specifying the possibility that was chosen cannot be attributed to chance. All the elements in this general scheme for recognizing intelligent causation (i.e., choosing, ruling out and specifying) find their counterpart in the explanatory filter. It follows that the filter formalizes what we have been doing when we recognize intelligent causes. The explanatory filter pinpoints what we need to be looking for when we detect design" (Dembski et al., 1998a).


Some critics have objected that while concluding design could be legitimate from the analysis of artifacts, in the biological realm, instead, we would be dealing with a kind of question for which our intellectual powers are not adequately equipped. According to this vision, in order to infer design from data provided by empirical science, we must thoroughly examine all possible natural causes at the nodes labeled as "law" or "chance" in the explanatory filter. And since this is logically impossible -continue opponents-design does not constitute a scientifically valid explanation, but an argument from ignorance and misconception, to be replaced by the new knowledge that science, by its steady progress, will give us (, 1988). 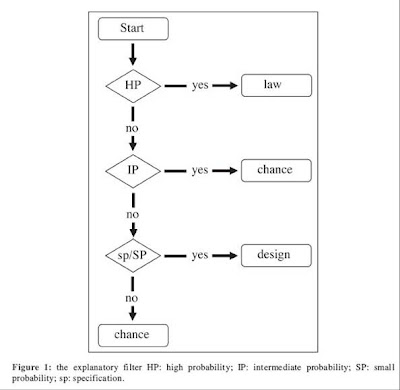